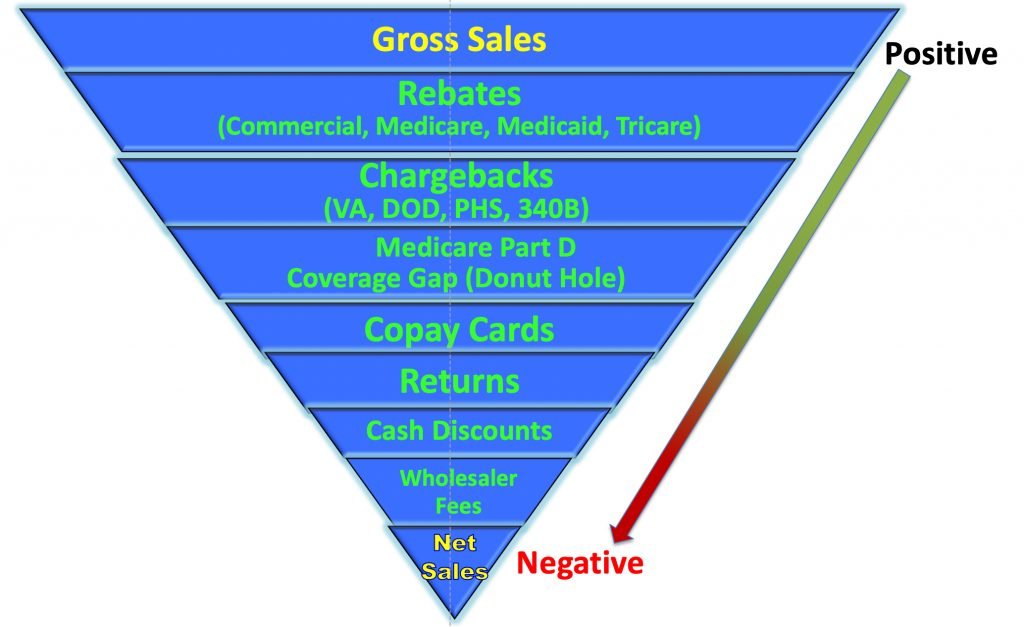 Commercial Rebates Coupled With Copay Buydown
A $600 copay buydown is offered to reduce out-of-pocket costs from $1,000 to $400 for a patient with a high deductible. In addition, a commercial rebate of 48% is offered for formulary access. Net sales and loss for the prescription are -$150 and -$285, respectively. 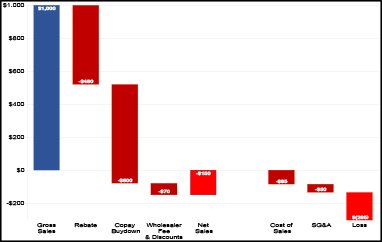 Medicare Rebate Coupled With Coverage Gap (“Donut Hole”) Rebate
Branded pharma companies are required to pay a government rebate of 70% when the patient enters the Medicare Part D Coverage Gap (“donut hole”) by incurring retail drug costs exceeding $4,130. In addition, there is a PBM-negotiated Medicare Part D rebate of 48% for formulary access. Net sales and loss for the prescription are -$250 and -$385, respectively. 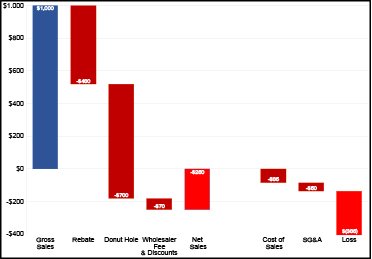 Medicaid Penny Pricing
More than 2,300 established drugs are at the 100% Medicaid rebate cap (price of one penny per unit) due primarily to historical manufacturer price increases significantly outpacing inflation. Net sales and loss for the prescription are -$70 and -$205, respectively.

340B Discount Plus Medicaid Rebate
Duplicate discounts occur when a drug is purchased upfront with a 340B discount and later dispensed to a Medicaid beneficiary and submitted for a Medicaid rebate (“double dipping”). Net sales and loss for the prescription are -$1,070 and -$1,205, respectively. 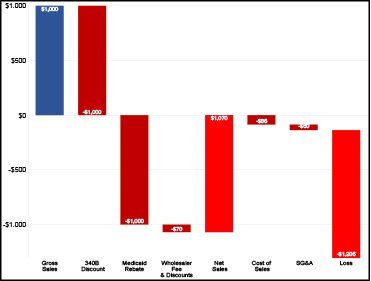 Pharmaceutical manufacturers can have over 15% of prescriptions that are underwater due to the combined impact of multiple GTN adjustments including: 1) commercial rebates and a copay buydown; 2) PBM-negotiated Medicare rebate and donut hole rebate; 3) Medicaid penny pricing; and 4) 340B discounts and a Medicaid rebate. 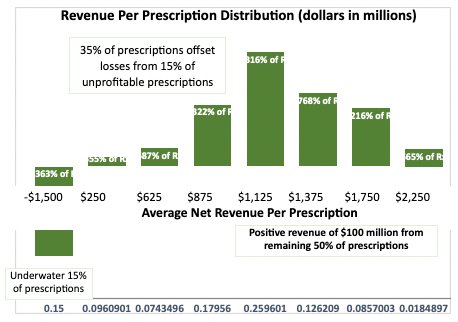 Physician targeting needs to be modified. Emphasis on the bottom 15% of prescriptions should be limited to ensure that the physicians targeted by the salesforce are generating positive net revenue. Companies may not be aware of high-decile physicians that frequently prescribe and generate negative revenue. There may be opportunities to reallocate resources by replacing negative low-yield prescribers with newly-targeted physicians having higher net revenue yields.

Not all prescriptions and gross sales are created equal. Sales reps could be incentivized based on net revenue per prescription. Accordingly, territories may need to be realigned to place more emphasis on the most positive net revenue prescribers. Physicians that were previously non-targeted and have a higher net revenue yield per prescription should be added to the call plan to optimize allocation of resources as well as net sales.

Pharmaceutical manufacturers may also consider social initiatives to ensure patients of physicians that are no longer targeted have a high level of awareness and access to the drug to treat their condition.

Advanced data analytics coupled with cross-functional collaboration is required to gain insight. Sales rep alignment, targeting and incentive compensation may need to be modified. Analytical insights regarding net revenue per prescription and net revenue per prescriber are valuable and can lead to implementation of initiatives to achieve ambitious net sales targets. 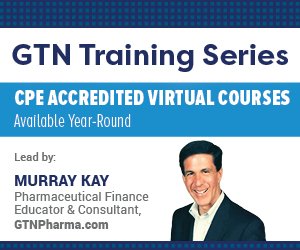